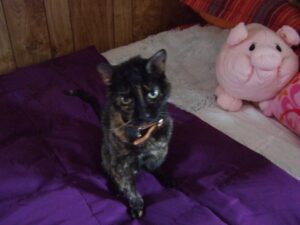 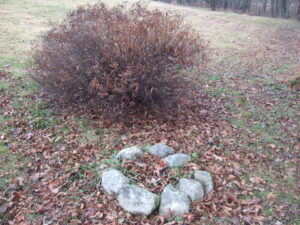 Elvira died a year ago last August.  I have not been able to write of her death until now.  I thought I was going to be able to save her, one more time, but I couldn’t. I thought she was going to prevail against all odds one more time, but she didn’t.
She had stopped eating.  I thought her vet could fix that.  On the morning of her death, after brushing her off, I sat with her in the glider on the back porch. For some strange reason she had taken a liking to the glider. It was one of only three places where she would allow her feet to be off the floor, the other two being the chair where I brushed her and the counter where I gave her infusions.
As I patted her side and she switched her tail in contentment, I told her that David and I were taking her to the vet that afternoon to have her kidney function checked and to get her an appetite stimulant. The rest would be up to her, I told her. She would have to make an effort and eat more.
But we live in a “man proposes, God disposes” world. Anyway, once we were in the vet’s exam room with Elvira in my lap, on a sudden impulse, I asked her vet to check Elvira’s sense of smell. Elvira didn’t have any. I felt as if I had been kicked in the stomach.
That was why Elvira wasn’t eating. And I could not fix that, her vet could not fix that, Elvira could not fix that. If Elvira didn’t have a sense of smell, not only could she not taste her food, she also couldn’t smell my scent on the bedclothes of my bedroom, which is where she spent most of her time, or on the clothes in my closet. She could not smell me when I walked into the room. The only anchor to the physical world she had was through touch, feeling the floor under her feet, the bed she was lying on, my touch when I petted her.
She was hanging on to life by a thread. She couldn’t see, she couldn’t hear, she couldn’t see.  So I decided to cut that thread and let her go. Cradling her in my arms as the vet gave her the injections to put her to sleep and to stop her heart, I talked softly to her, rubbing her head, rocking her with my body. She went to sleep in contentment, knowing that she was in my lap, knowing that she was safe, knowing that I loved her and would take care of her as I always had. Then she died.
David and I buried her on the creek bank with all my other cats. While he dug her grave, I sat in the swing with Elvira’s body. The vet  had wrapped her body in the towel she had arrived in and placed her in a box to carry her home. Over the towel, I put a pink blanket that I had used for my first grandchild, Zoe, born the same year as Elvira. In the box I put her brush and her favorite toy. Then I patted her until David came for her. Looking at her towel-wrapped body for the last time, I closed the lid of the box.
David would not let me watch him fill in the grave and cover it with the stones we kept on the creek bank for that purpose. So while he buried her, I looked for some flowers for her grave. I had not bought her any as I had not expected her to die that day. I finally found in my iris bed some oregano that was covered in tiny white blooms.
David returned and walked me to the grave, flowers in hand. As I placed them on her grave, I could not help but think of the many times in the last year I had noticed those stones, hidden in the grass at the edge of the cemetery and thought that one day they would be used for Elvira. How far away that day seemed at the time. And now it had arrived.
I looked at her grave for a long time, unable to absorb the reality of her curled up in her box, under all that dirt and stone. I think I would have stayed there forever had not David taken my hand and led me up the hill toward the house that had been filled with Elvira’s presence for 19 years, toward the house, now empty of her presence, that I would have to learn to live in.